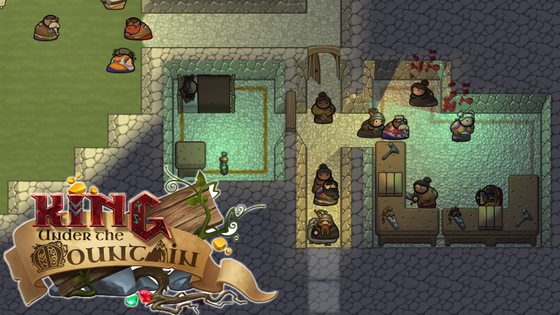 Lost Your Survey?
FAQ: King under the Mountain

As Rimworld has proved, the visual style pioneered by Prison Architect is an ideal fit for this type and genre of game. It’s also, most importantly, achievable for a small indie team with a limited budget which is why we’ve decided to use the same styling. We’re not in any way affiliated with the teams behind either game and don’t share any code or assets. We do however owe them a lot of thanks for pioneering the genre in modern times and we think you’ll be seeing a lot more games with a similar style in the near future.

King under the Mountain has been in active development for the past couple of years on a very small budget to get the basics in place and build towards the playable prototype that’s available with this campaign. You can follow the last year or two of dev updates here. We’re now at the stage of needing to add a lot more content both in code and artwork, both of which are very expensive to do well, so we’re on Kickstarter in the hopes of a successful campaign to both make that content possible and massively speed up development time.

How do I know this Kickstarter will deliver an actual game?

Far too many games on Kickstarter run a successful campaign only to end up never actually delivering a playable game into the hands of its backers. The great majority of these are usually impressive concepts and mock-ups without a “real” game behind them. This is why we’ve worked hard towards releasing the playable prototype with this campaign - to prove the game already exists in a playable form, that the team is capable of building it, and as a proof of concept for the basics of gameplay.

When will the game be finished/released/done?

We’re aiming at having the first alpha release in February 2019. From there, we’ll be releasing new builds of content and features every 1 or 2 months. At this stage it’s impossible to say exactly how long the entire development lifetime will last (a lot depends on stretch goals being hit or decent alpha sales) but roughly, we have a plan to keep updating the game and adding more to it for several years.

How will you fund the game with a £10,000 Kickstarter goal/budget?

So far development on the game has been done around other (contract) work which keeps the lights on and development ticking over. £10,000 isn’t enough to fund the game (not even enough to cover either of the art or music budget), but it’ll mean less time spent on other contract work and more development time on the game, and/or more budget for artwork, music and sound effects (which are freelanced currently). In the case the Kickstarter is extremely successful it might end up being able to fund the great majority of development, but the more likely outcome is it speeds up development quite a bit while not quite removing the need for funding from elsewhere.

Will there be multiple levels per settlement or "Z levels"?

No, primarily for game design reasons - we think it’s more interesting to impose the design constraints on the player of having to build a working, efficient settlement on a single level. Also, introducing “Z levels” could make things very confusing for a player exploring another map split across many different levels. There will however be “entrances” to other levels within your settlement, such as discovering a stairway into a dungeon or forgotten realm within the caverns of the mountain, which you’ll have the option to explore with a party of adventurers.

Can I play multiplayer (online or co-op)?

While we don’t have any plans for “direct” multiplayer, you’ll be able to visit and explore the settlements of other players in a kind of asynchronous, indirect multiplayer mode. This is not exactly a player vs player mode - if someone attacks your settlement (or rather a copy of it) you won’t be at risk of losing anything, instead there will be bonuses for participating in the system. We also have plans for more peaceful exploration of the creations of other players, particularly via “friend” features which are planned late in the development roadmap.

Are there any restrictions on naming my settler?

Yes, we’ll ask that you either use a “real world” name or a fantasy name in one of many styles, which we’ll be providing further details on as this backer reward is fulfilled. This is to avoid any immersion-breaking modern gamer slang names or inappropriate content for others. Similar rules apply to the naming of other backer-created content.

Which platforms will the game be released on?

Windows PC, Mac and Linux. We also don’t have any plans for any kind of console or mobile release, but never say never. Thanks to the platform-independent technology, we’ll be releasing on all these platforms at the same time.

BackerKit is a service that crowdfunded project creators use to keep track of hundreds to tens of thousands of backers—from shipping details, pledge levels, preferences and quantities, whether they have paid or had their card declined, special notes, and everything in between!

The BackerKit software and support team is independent from the campaign’s project team—BackerKit does not handle the actual reward shipping. For more information about the preparation or delivery status of your rewards, please check the project's updates page.

How does BackerKit work?

After the campaign ends, the project creator will send you an email with a unique link to your survey. You can check out a walkthrough of the process here.

I never received my invitation. How do I complete the survey?

The most common reasons for not receiving a survey email is that you may be checking an email inbox different from the email address you used to sign up with Kickstarter, Indiegogo or Tilt Pro account, or it may be caught in your spam filter.

Confirm that the email address you are searching matches the email address tied to your Kickstarter, Indiegogo, or Tilt Pro account. If that doesn’t work, then try checking your spam, junk or promotions folders. You can also search for "backerkit” in your inbox.

To resend the survey to yourself, visit the project page and input the email address associated with your Kickstarter, Indiegogo or Tilt Pro account.

How do I update my shipping address?

When will my order be shipped, charged or locked?

That is handled directly by the project creator. BackerKit functions independently of the project itself, so we do not have control of their physical shipping timeline. If you want to check on the project’s status, we recommend reading over the project's updates page.

I completed the survey, but haven't received my rewards yet. When will they arrive?

As BackerKit does not actually handle any rewards or shipping, the best way to stay updated on the shipping timeline would be to check out the project's updates page.